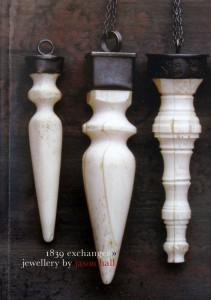 “An exhibition about jewellery, identity and cultural exchange explored through a series of amulets created for Frederick Edward Maning”

Since 1998 Jason Hall’s jewellery has been asking questions about Päkehä identity. His work represents a consistent struggle to negotiate being Päkehä through an awareness of the traditions and craft of contemporary jewellery in Aotearoa. 1839 Exchanges: Jewellery by Jason Hall is an exhibition about jewellery, identity and cultural exchange explored through a series of amulets created for Frederick Edward Maning, an Irishman who arrived in Aotearoa in 1833 and became a trader. Maning is a well known Päkehä Mäori, a term that refers to Europeans who lived as Mäori in the early phase of colonisation. Maning, who initially advised Mäori not to sign the Treaty of Waitangi, later became a land court judge in the 1860s, and a member of the European colonial gentry.Most cultures have made use of the amulet, in which a part of what is feared (commonly a tooth or claw) is strung up and worn in order to ward off the object of fear. Hall’s works draw a parallel between the amulet and the tension that sits at the heart of settler societies around the question of native and indigenous, and explores how settlers might construct a convincing claim of belonging to a land they have stolen.1839 Exchanges: Jewellery by Jason Hall features essays by the exhibition curator, Dr Damian Skinner, and David Colquhoun, curator of Manuscripts at the Alexander Turnbull Library in Wellington.