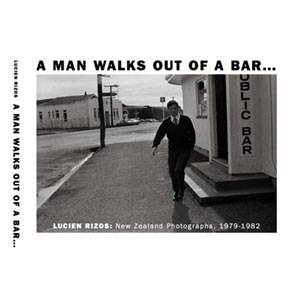 A MAN WALKS OUT OF A BAR…
Lucien Rizos: New Zealand Photographs 1979 –1982
Essays by Damian Skinner and Ian Wedde

‘These photographs come from a very specific time in New Zealand history’, says Rizos. ‘The New Zealand I lived through then may feel like a different planet to a younger generation now, people who did not live through the Muldoon era and the trauma of Rogernomics. But there are themes that bind the different periods together. Even though New Zealand may look very different now, I feel it is still fundamentally the same place that it was when I was taking these photographs.’

In 1979 Lucien Rizos set out to photographically document New Zealand. Working in the New Zealand Symphony Orchestra, Rizos toured the country, carrying his camera and making images of the people and culture that he encountered along the way.

With the example of Robert Frank’s book The Americans firmly in mind, Rizos set out to represent the ordinariness of everyday life in Godzone, while also being aware of the isolation and tensions of social life in New Zealand.

With their unashamedly emotional tone, and sometimes harsh – more often melancholic – view of people and the rituals of daily existence, Rizos’s photographs evoke a place and time that is both familiar and strange, a vision of New Zealand that remains captivating over three decades later.

Over five years Rizos took thousands of photographs in cities and small towns around the country. At the end of 1983 he decided to give up photography in favour of other kinds of art making, and the book languished. When the Alexander Turnbull Library accepted the negatives into their collection in 1988, Rizos produced a number of photocopied books which attempted to shape the photographs into a coherent story.

His interest in the project rekindled by a 2005 exhibition at the City Gallery, Wellington, Rizos began to look at his photographs again, and decided to finish what he had started three decades earlier. This book is the end result of that process.