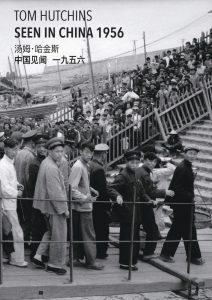 This bi-lingual book was produced to coincide with the debut exhibition of photographs made in China 60 years ago by the pioneering New Zealand photojournalist and photographic educator, Tom Hutchins (1921-2007), presented at the 2016 Pingyao International Photography Festival.

‘On the platform there are many people waiting to cross the other way, waiting for the train back to Hong Kong. . . No one seems to mind having their pictures taken, and the attractive girl who sends off my cable from a raised bureau in the middle of the platform blushes and smiles with charming embarrassment as I focus closely on her, and a few smiling people gather to watch. As she looks up tables and concentrates on getting a few words away to a strange place called New Zealand I keep my camera busy, and behind it I secretly celebrate this first success in doing what I had come to China for—photographing in my own way and on my own terms these people who number a quarter of mankind.’

The above quote is from Tom Hutchins, writing about entering Communist China on 9 May 1956, which was then closed to most of the world. It was the beginning of four months of non-stop activity for him.