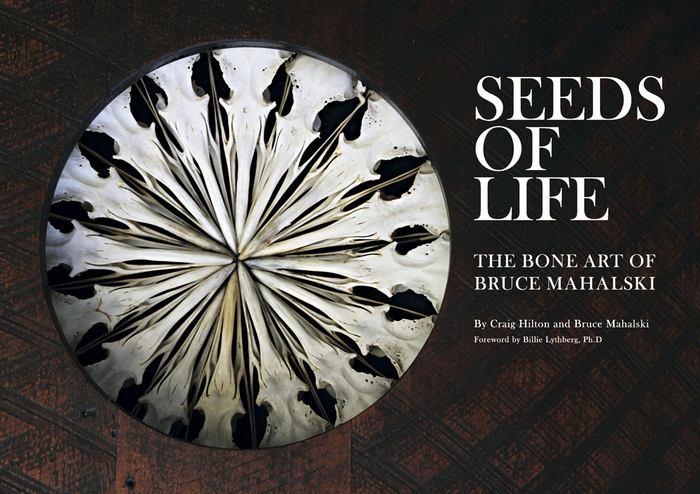 ‘Seeds of Life – the Bone Art of Bruce Mahalski’ is a new book by scientist and artist, Craig Hilton. It realises the symbiotic potential of art–science collaborations with an unrelenting intensity. Both Mahalski and Hilton are interested in the ethical and philosophical implications of using biological material (living and non-living) in art to critique what they see as outdated and ‘species-dangerous’ social norms. The ethics of collecting biological material and making art with it are also discussed. The book’s title refers to the Ancient Aztec’s belief that their gods used human bones as seeds to grow new ones and Mahalski’s firmly held opinion that bones are not symbol’s of death but beautiful and enduring reminders of life. This sixty-four page book is illustrated by photos of Mahalski’s work by many noted NZ photographers including Michael Hall, James Gilberd and Andrew Ross.

New Zealand multi-media artist Bruce Mahalski has had solo and group exhibitions of his art work in a range of media including screen-printing, photography, painting and sculpture since 1996. In 2005 he made the first bone sculpture as a protest against the Iraqi War and by 2010 he had begun to specialise in his trademark textural bone sculptures.

Craig Hilton is a New Zealand artist. After completion of a Ph.D in genetics and biochemistry at the University of Otago in New Zealand, he took a position at Harvard Medical School and then later at the University of Massachusetts as an oncologist and immunologist. Later he obtained an MFA at the Elam School of Fine Arts.  Hilton’s art and writing explore the intersections and interactions between science and art, technology and biology, using whatever media necessary. He is particularly interested in art–science collaborations that offer genuine value to and outputs for both the arts and sciences; how art might contribute to dialogue regarding science, molecular biology, biological discovery, and biotechnology; and the cultural implications of these revolutionising technologies.