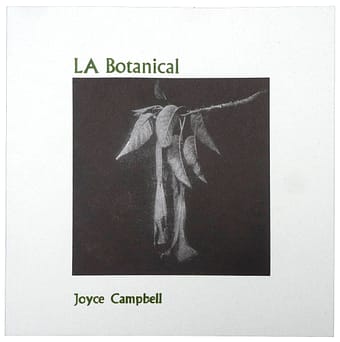 LA Botanical is a series of ambrotype photographs of plant specimens found in the greater Los Angeles area. It was conceived by the multidisciplinary artist Joyce Campbell in the wake of Hurricane Katrina which devastated the Gulf Coast of Louisiana in 2005. The aftermath, particularly the inability and unwillingness of the Federal Government to respond to the crisis in flooded New Orleans, highlighted the vulnerabilty of a populace stranded in the face of natural, and human induced calamity in the world’s most powerful nation. As a mother raising her young child in a sprawling American city Campbell was compelled to ask: when the supply chain is disrupted and the supermarkets are empty, and there is no sign of aid reaching you, how can ‘art’ be useful?

Campbell was raised on pastureland dotted with remnants of native bush inland from Wairoa township, on Aotearoa New Zealand’s rural East Coast. Her family were farmers, botanists and gardeners. Upon migrating to Los Angeles in 1999, she observed a fundamentally alien relationship between the city and its vegetation. Plants that had been introduced by waves of immigrants for food, fuel or medicine had gradually run wild across the city scape, the knowledge of their utility lost to time and neglect induced by a form of industrialized capitalism that was both aggressive and immersive. This book sets out to reveal the breadth of attributes ascribed to the weeds of Los Angeles via the enchantment of its seductive contents: plants rendered ethereal by the wet-plate photographic process that emerged simultaneous with the city itself.

Tessa Laird, in her essay within this volume, calls this book “. . . a poisoner’s handbook, a herbalist’s cure-all, a shaman’s bundle, a gardener’s guide, a botanist’s field manual, an artist’s scrapbook.” It can be all these things. This book is multidisciplinary in its scope, but it exists primarily as an artwork.

The first-edition was published in 2007, to accompany the exhibition LA Botanical at G727 – a Los Angeles gallery dedicated to generating dialogue via artistic representations and interpretations of the urban landscape.

This 2022 second-edition reissue by Rim Books, published on the occasion of the exhibition at Two Rooms gallery in Aotearoa New Zealand and featuring two extra plates, is now reproduced in duotone with a foreword by Dr. Susan Ballard, and a new cover, hand-printed on a vintage Asbern letter-press by the artist in twenty distinct botanical iterations.

Please choose the desired cover and name the plant in the notes in your order. (All variations of the images names of plants will be posted on this page after 15th of December)

KŌWHAI AND THE GIANTS

Kowhai first appeared from the golden glow of a beautiful flower… and her voice was the rain and the sea and the cry of a bird.’ Follow Kowhai as she discovers a tiny seed’s hope to build a great forest.

Debut children’s author Kate Parker is a visual artist and theatre maker who is inspired to support positive environmental change on our planet. Here she creatively shares her vision of reforesting Aotearoa, one seedling at a time.

Kowhai and the Giants is a bitter/sweet story about the decimation of Aotearoa’s mighty forests following human habitation. But it is also a story of hope. While Kowhai may be small and alone, her actions will bring about change and soon, she will be joined by others.

“When you go to nature and you take care, you will be reimbursed with energy. I always felt the presence of beings in the forests where I grew up. Kowhai represents these beings in some way, committed to the preservation of the natural world. We are all a part of this. We can all be kaitiaki, it is in fact our responsibility (to be caretakers for our natural surroundings) and when we take this on in any way we can, positive change happens. Even in a city you can support environmental projects. If we can support Aotearoa’s native plant diversity to flourish, then we are supporting so many native birds, insects and fish. This diversity feeds the land and cleanses its waters. It sustains us.” — Kate Parker

Kowhai and the Giants asks the reader to listen with all their senses to their natural surroundings and to discover Kowhai’s call for themselves. A wise and beautifully told fable, its compelling narrative will kindle a desire to spend time in nature, search for seeds and to grow native plants and trees – a hopeful picture of the future for children aged four to ten and their caregivers.

In the resources section at the back of Kowhai and the Giants, Parker encourages children to plant native seeds. She includes a link to Forest & Bird’s Kiwi Conservation Club – Hakuturi Toa website www.kcc.org.nz for inspiring tips.

Kowhai and the Giants is “Like the shadows of memory on a landscape, caught between lightness and darkness, the past and future, a beautifully cast tale of hope and resilience,” says acclaimed artist Shaun Tan.

The unique and intriguing artwork for Kowhai and the Giants was created from hand-cut paper, placed in a plywood box and lit from behind. It was first exhibited in 2016, at the Arataki Visitor Centre, following Parker’s Auckland Council artist’s residency at Anawhata. There was an exhibition of the light boxes in the window of Auckland store Smith and Caughey from 17 to 21 March, as part of the Auckland Arts Festival – Aroha 2021.

Geophagy, the practice of consuming dirt and clay, can be read as a metaphor for our overpopulation, consumption, and destruction of the Earth. Used by some indigenous peoples in cooking to absorb toxins from indigestible plants, geophagy can also be read as a more positive reference to our relationship to the Earth, and to indigenous knowledge; a conscious and purposeful consumption.

Auckland-based, Canterbury-born Ruth Watson’s multifaceted exhibition is acutely about the present moment, speaking to global politics and environmental issues. Through a sprawling installation, video, audio and printed works, Watson takes a critical look at the world today and seems to suggest that it’s not clear what we should do, collectively or individually. With so many issues and paths of action vying for our attention, the immeasurable size of the problems we face, and the systemic causes out of our control, taking action can feel overwhelming.

Describing the world as being in a state of “dystopian present”, Watson reflects on the complexity of our relationship to the environment, and the incongruity of living in a place that we are destroying, without any clear means to unify and prevent that destruction.

Moyra Elliott and an essay by Peter Wells. With photographs by Marti Friedlander and Studio La Gonda

Researched and written by Moyra Elliott – co-author of Cone Ten Down: Studio Pottery in New Zealand 1945-1980, (Bateman 2009). Warren Tippett was an agent of change in New Zealand ceramic practice. He was reared as a ‘mud and water man’ in the 1960s because of where the strengths lay in the clay culture of the time with its influences from an imported Anglo-oriental style. However, he jumped ship and some twenty years after he became a potter, after playing briefly and creatively with sculpture – returned to the vessel and made the surface decoration his primary concern. He investigated areas that hitherto had been of little interest in New Zealand pottery and in doing so, connected with long histories of decorated pottery from many cultures. He also took references from his surroundings in Grey Lynn introducing palm trees, cacti and floral motifs and responded to the fresh stimulation of his urban environment with its strong Polynesian elements – lei and lava-lava and the Tongan brass band along with the vibrant street life where the raffish and the gaudy juxtaposed the cool. His new vocabulary became something unique – an expression of a region, a poly-centrist, polygenetic place located somewhere on the western Pacific part of the map.

Through his work, Tippett helped reform the canon of ceramics in New Zealand. No artist works in isolation but he was critical for the acceptance of earthenware in contemporary ceramic practice. His legacy is that he legitimised electric firing at lower temperatures which overturned an entrenched blueprint on how to make and what to make. By embracing the aesthetics more associated with pop culture, Polynesia and carnival ware, he opened doors to a healthier diversity.

The first edition of this book accompanied a retrospective exhibition of Warran Tippett’s work at Objectspace in Auckland 2005/6 curated by the author.  This 2nd expanded edition features a visual chronology of Warren Tippett’s works, as well as previously unpublished portraits of Tippett by the late Marti Friedlander, and revised photographs with better reproductions of key works.

“Warren Tippett is a seminal figure in the history of New Zealand studio ceramics because his works and lifestyle connect up key moments and significant local and international studio ceramics dynamics. In the words of curator Moyra Elliott, “Tippett helped reform the canon of ceramics in New Zealand.” Tippet started potting in Invercargill in the late 1950s. By the 1970s, and living in Coromandel, he was recognized as an important second generation figure in the ranks of potters working within the Anglo-Oriental tradition. This school of thought derives from the writings of English potter Bernard Leach which drew inspiration from medieval English and traditional Japanese and Korean pots which emphasised material, a quiet decoration and the spontaneity of the firing process. The philosophy engendered a vocational, workshop centred, pottery making life. It was this approach that informed most New Zealand studio ceramics production of the time. Moyra Elliott has pinpointed the time around the 1978 exhibition at Auckland’s New Vision Gallery and the 1980 Five by Five show at the Denis Cohn Gallery as a pivotal time in Tippett’s practice which “condense shifts in New Zealand clay practice, which actually took more than a decade, into a little over a year. The shift revolves around notions of function and diversity…there was a repositioning beyond function and into the decorative.” Changes in Tippett’s lifestyle were reflected in his work. As his interest moved from form to surface his work embraced the colourful and vibrant influences of his own Auckland and Sydney environments, the traditions of decorated Oriental and Mediterranean ceramics and contemporary international developments that located ceramics as part of a wider dynamic visual culture. In making a series of innovations within his own practice he “overturned an entrenched blueprint on how to make pots and what kind of pots to make. By embracing the formerly scorned earthenware and aesthetics more associated with pop culture, Polynesia and carnival-ware he opened the doors to a healthier diversity””.

Hinemihi: Te Hokinga – The Return
Hamish Coney and Dr Keri-Anne Wikitera
with contributions by Jim Schuster, Lyonel Grant and photographs by Mark Adams
The journey of the carved house Hinemihi o Te Ao Tawhito (Hinemihi of the old world) is one defined by cataclysmic events and the unpredictability of elemental forces.
Continue reading →

‘Seeds of Life – the Bone Art of Bruce Mahalski’ is a new book by scientist and artist, Craig Hilton. It realises the symbiotic potential of art–science collaborations with an unrelenting intensity. Both Mahalski and Hilton are interested in the ethical and philosophical implications of using biological material (living and non-living) in art to critique what they see as outdated and ‘species-dangerous’ social norms. The ethics of collecting biological material and making art with it are also … Continue reading →