BRAINWASH-INGTON DC: A 1982 PHOTOGRAPHIC ‘ON THE ROAD’
Stuart Page 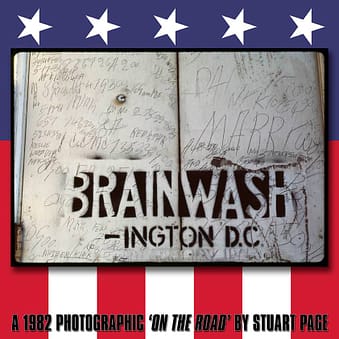 It features photographs Page took on a 6 month journey around USA that he made soon after his graduation from Ilam School of Fine Arts, where Shustak taught. It was an ambitious undertaking, funded by the NZ government arts council, and a rare opportunity for him to take his learning from the school into practice on the streets of where the art came from. Page says, in his introduction to the original exhibition of the resulting photographs in 1984:

“The most exciting and relative communication seemed to me to be happening ‘on the street’, much of it in an unconscious spirit, many people recording their feelings on walls, or dancing, dressing in costume and playing music, as well as accidental collages occurring from layers of paint and paper on surfaces which are scraped away revealing lower layers, or paint spilt from a passing truck, or rust and rot and scratches and dents on old steel surfaces. Erosion and trash caused by constant crowds of people passing through streets renders the environment as a hologram from which an understanding of people’s concerns and lifestyles can gradually be picked up.”

This publication is a new edit of Page’s important archive, a purposeful photographic journey without a script, images juxtaposed with reproductions of pages from the personal diary he carried on the road. In addition, this book has a special treat: ‘Tripping USA’, a 45min soundtrack mix CD, originally released on cassette (sounds were captured on an iconic Sony Walkman), this is a limited edition release comprised of street noise, mixed in with radio and TV audio together with Page’s personal pop play-list of the time. A multimedia artist, film-maker and musician, Stuart Page has contributed enormously to New Zealand culture since his trip was made almost 35 years ago, and this is a glimpse into his rarely seen photographic oeuvre.