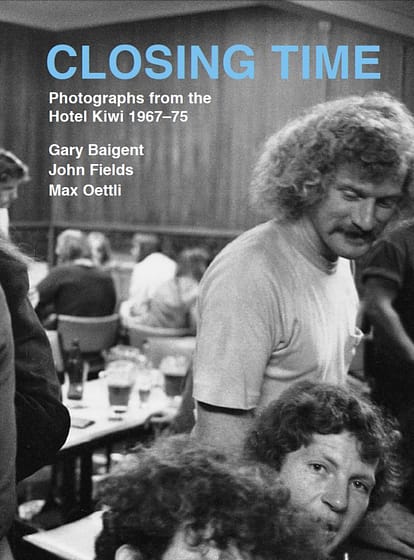 This limited edition zine-style photobook feature the photographs made at the bars of Hotel Kiwi from the archives of three photographers, who have all, in their own way, contributed to the development of early contemporary art photography in New Zealand.

Hotel Kiwi was situated at the corner of Wellesley and Symonds Streets in Auckland – close to the University and the Elam School of Fine Arts. Described in The Pub-Goer’s Guidebook (1966) as “Built almost entirely of formica and rubberised floor tiles, with the whole place giving out a general lavatorial atmosphere, it surely represents all that a pub should not be . . . The only feature of the place that is at all remarkable – and the only reason for giving it a ½ an award are the barmen. They are possibly the best we encountered anywhere.”

Max Oettli found employment as a bartender at Hotel Kiwi after graduating from University of Auckland in the late 1960s. He carried his Leica camera on the job, photographing the varied patrons of the old and new, around the time ‘six o’clock swill’ was scrapped to more civilised 10pm closing. As well as the Hotel being the go-to student bar, artists and photographers – many associated with the art school – frequented the bar and are captured in this booklet. Max is joined by fellow ‘New Photographers’ Gary Baigent and John Fields, (a title coined by Athol McCredie in his exhibition, The New Photography at Te Papa), who photographed their friends and acquaintances at Hotel Kiwi at the time.

This book also features texts by Elizabeth Eastmond, who lectured in the Art History department and Ted Spring, then a student at Elam recollecting their time spent at ‘the Kiwi’, in conjunction with field notes and recollections from the three photographers.

“Here, is the wisdom and failings of age, the impetuosity and rudeness of youth, all jammed into a room, thick with smoke and drumming with noise. Conversations are a spectrum in themselves ranging from worn clichés and small talk to nuclear physics, with plenty of spread thighs and cock jumbled in from both sexes.” From John Fields’ dairy, 21 February 1969.

Gary Baigent is a key figure in the emerging moment of contemporary New Zealand photography of the late 1960s. Born in Wakefield, Nelson, in 1941 he majored in painting at the Canterbury University School of Fine Arts, Christchurch from 1960 to 1962. Baigent began working on The Unseen City: 123 photographs of Auckland, a book on Auckland’s urban life, published in 1967, with its contrasty, grainy images shot on the streets, in backyards and pubs, on the wharves and in student flats. The book was polarising but it also helped stimulate a new style of photography.

John Fields (1938-2013) was born in Massachusetts, USA and was educated in Rockport, a New England artists’ colony. He learned to photograph while in the US Navy and became a commercial photographer in the early 1960s before working as a specialist in electron microscope imaging at the Massachusetts General Hospital. He emigrated to New Zealand in 1966 to continue working in this sphere at the University of Auckland. He also brought an expectation that photography was better recognised within the arts in his adopted country. To this end in 1970, he organised a cooperatively published booklet of the work of ten contemporary photographers, Photography: A visual dialect – the first such publication in New Zealand. He was also responsible for one of the first exhibitions of contemporary photography at a dealer gallery: a group exhibition at Barry Lett Galleries in 1972.

Max Oettli was born in Switzerland in 1947 and migrated to New Zealand with his family in 1956. He was brought up in Hamilton and was a trainee press photographer at the Waikato Times over university vacations from 1966 to 1969. He applied this experience to his work on the student newspaper Craccum while he studied English, history and art history at the University of Auckland. From 1970 to 1975 Oettli was a technical instructor in film and photography at the University of Auckland Elam School of Fine Arts. For some of this time, he was also the founding president of PhotoForum, a group advocating for and promoting expressive photography.