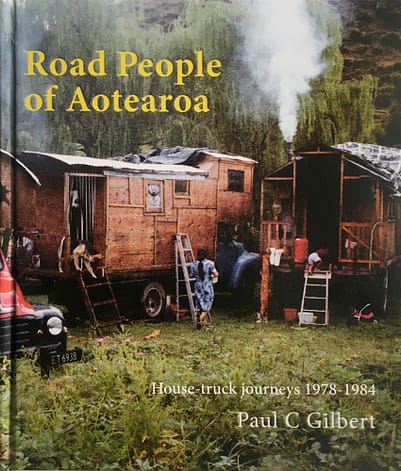 A historic photo-essay by the late Paul C. Gilbert, this book chronicles the early days of the New Zealand phenomenon of DIY house trucks, which appeared on the roads around the mid-1970s as part of an alternative lifestyle movement. The house-truckers were drawn to the alternative life and music festivals of the time, including Nambassa in the late 1970s and Sweetwaters festivals in the early 1980s. Paul Gilbert travelled with the grass-roots music and performance troupes in their convoys of hand-converted house trucks starting with ‘The Original Travelling Road Show and Mahana’, as they journeyed through small communities and music festivals around the North Island.

Paul Gilbert’s camera intimately observes the road people while building and decorating the house trucks with their wonderful interiors and also in their everyday activities. He captures their children and families and the fringe circus and musical performances in various festivals and different locations. Throughout the 1970s and 1980s, many house truck conventions and grass-roots festivals around a variety of themes were held in New Zealand where house-truckers would converge, not only for the event but for the opportunity to connect and share information with other truckers. Low-key festival circuits could be found in regions of Coromandel, Northland, and West Auckland, where, for two decades, Moller’s farm at Oratia west of Auckland, a popular venue for blues and folk festivals, offered an open house for truckers to park on a semi-permanent basis as needed. These were unique times indeed.

Paul C Gilbert (1954-2019) started taking photographs as a young boy via family influences. Early projects were developed as documentary street photography in the fine arts tradition when he was a founder member of PhotoForum NZ in 1973. He was employed as a photographer at the Department of Scientific and Industrial Research and then at the Auckland City Art Gallery in the 1970s. He left employment to pursue the project, ‘Road People of Aotearoa’ in 1978. Later, as an independent photographer, he mainly specialised in documenting maritime heritage, vessels and history. He was the technical instructor of photography at Elam School of Fine Arts at the University of Auckland from 1990 to 2008.

Haru Sameshima, in his essay, interviews many of the house truckers – to uncover the historical context of the musicians and street performers against the backdrop of the latter stages of the alternative life movement that manifested in the festivals and events in Paul’s photo-essay. The musicians, clowns, street performers, and their friends, who have now seen many of Paul’s photographs for the first time after 40 years, recount the festivals and road journeys in their own words. John B Turner, influential photography teacher at Elam School of Fine Arts from 1971 to 2011 – in his essay reflects upon Paul’s life as an individual and a photographer – and situates his image-making in the international movement of personal documentary photography, as an embedded observer of life, rather than outsider reporter/photojournalist.

Without a counterculture, what chance has the mainstream culture of improving, growing and diversifying? As well as being vehicles of imagination, poetry and a romantic life-concept, the vehicles photographed by Paul Gilbert have become a far greater force in the country’s evolving consciousness than anyone ever expected. In the present era of small houses and mobile homes, these images offer not only a prehistory but also a soundtrack and some messages worth deciphering, written with love on the fugitive walls and ceilings of the not-so-distant past.